As Gibraltar continues to flex its economic muscle, local infrastructure has been stretched to breaking point. The need for investment has never been more clear, both to keep pace with the quality and size of the companies it attracts, and accommodate their future growth. With full employment, new companies mean more imported workers, and turning its compact size to business advantage requires fresh efficiency and new facilities if Gibraltar is to maximise the benefits from its highly-concentrated economy. From state-of-the-art office space to superyacht marinas and vital road overhauls, the government is already tackling the question marks that have begun to appear as the Rock’s services industry and workforce matures, evolves and expands.

In the 1990s, Gibraltar’s revolutionary Europort business complex became the hub of the Rock’s burgeoning service industry. Offering high-spec, self-sustaining offices and apartments with rapid and robust internet at the heart of their communications, it transformed the waterfront both physically and economically, paving the way for today’s economic virility. At that time, online gaming was in its infancy and just a dozen insurance companies operated on the peninsula. Today, that number is well in excess of 50, and flourishing sectors such as these have contributed to a 35-percent rise in GDP over the last five years.

Now it is the turn of the newly-erected World Trade Center Gibraltar to provide an ultra-modern Europort equivalent on the eastern flank of this small territory and relieve the pressure on Gibraltar’s shrinking office stock. Mooted since 2010, the £45 million development is now approaching readiness, with 85-percent occupancy already guaranteed, highlighting the huge demand for space.

“Every successful economy has to be built on solid infrastructure”

The impact of Europort is clear. In 1982, Gibraltar was home to 29,350 people and 11,650 jobs. By 2011 the population had crept up to 29,750 people with a total of 22,250 jobs. That continued rise has inevitably placed proportional strains on every aspect of the Rock’s core elements, from housing and traffic to office space and internet provision.

With the jobs also came more cars, and a huge increase in use over the last 10 years has brought suffocating congestion to Gibraltar’s roads during peak times. Central to the peninsula’s future fluidity will be the relief of the traffic problems caused by shutting Winston Churchill Avenue – the sole link between Spain and Gibraltar – for each landing and takeoff at Gibraltar’s recently modernised airport. Disruption currently amounts to up to two hours of road closures a day, and with the number of inbound and outbound flights set to rise, the issue is now being addressed. Earlier this year, the government introduced its 10-year sustainable traffic and parking plan that included the construction of a tunnel under the runway.

As important as keeping the city moving, however, is keeping its tourists, professionals and locals accommodated evenly. The competition for space and changing demographics has contributed to a leap in average house prices from £350,000 in 2008 to over £600,000 in 2014, prompting the government to make the provision of affordable housing central to what is a crucial and multi-layered approach to infrastructure policy over the next five years.

Every time a plane departs or arrives at Gibraltar International Airport, pedestrians and cars have to stop at barriers on either side of the runway, which intersects the busy four-lane Winston Churchill Avenue. It’s a canny use of the little space available, but also results in delays. 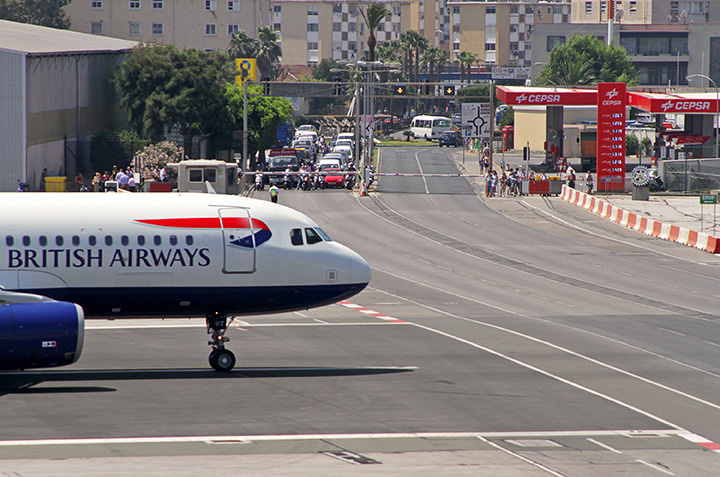