Basque businesses have largely weathered the economic crisis in Spain by expanding further into international markets. This is a good time, then, to rediscover the region’s close historical relationship with the UK

Beyond the jokes about shared wet weather and the football connection with Basque teams such as Athletic Bilbao having British origins, there is a long and deep-rooted commercial relationship between the UK and the Basque Country.

Formal commercial links go back to 1474, when a trade charter was signed by King Edward IV and reciprocated in Guernica whereby Basque merchants could freely trade with the protection of the Crown in England, and English merchants could do likewise in the Basque Country. But the explosion in UK-Basque connections came after the industrial revolution.

British steel companies were interested in the region’s iron ore reserves, building railways to aid exports from Basque ports. Then local businessmen realised that by importing British coking coal they could develop a Basque steel industry and joint ventures flourished.

The conflicts of the 20th century made the connection even deeper. “A Basque ship owner by the name of Sir Ramon de la Sota put his merchant fleet at the disposal of the British Crown during the First World War, and was knighted in return for his services, and that link continues,” says Derek Doyle, the UK consul in Bilbao. Following the bombing of Guernica during the Spanish Civil War, 4,000 children from the Basque Country were evacuated to the UK.

“Thanks to its special relationship with Britain's Rolls Royce, Basque turbine manufacturer ITP is confident of its future”

“Basically, everything that triumphed in Britain in the early 20th century triumphed over here around 30 years later. A steel and iron industry developed, as did shipbuilding. Our first steel ships were British,” says Jose Angel Corres, chairman of Bilbao’s chamber of commerce.

Now cooperation is focussed on more technological sectors, such as aeronautics. A partnership between Britain’s Rolls Royce and Basque engineering firm SENER created ITP, whose CEO Ignacio Mataix is confident of the future thanks to this “special relationship”. He says that “50 percent of future engines built to fly will have an ITP turbine inside,” owing to Rolls Royce’s 50 percent market share.

Energy is also a key sector in the region and power giant Iberdrola is a good example of how Basque business has internationalised in recent years. CEO Ignacio Galan recently said that Iberdrola is now “more British, more American and more Mexican than it is Spanish”, while announcing that 41 percent of the company’s planned €9 billion investment in 2015 will be in the UK.

For Jorge Unda, managing director of engineering firm SENER, opening a UK branch could serve as a stepping stone before crossing the Atlantic. “If you want to get into the US market from Spain, it’s very difficult. Our historic relationship with British companies will allow us to arrive in the US already being ‘British’.” 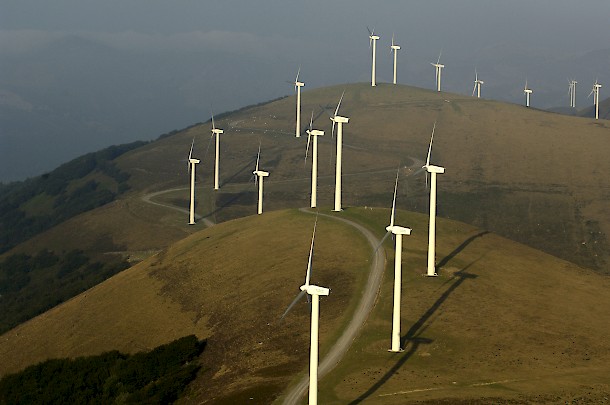 Bilbao-based energy company Iberdrola is teaming up with Scottish Power in a major offshore wind power project in the North Sea. Planning permission was granted in June to allow work to commence on East Anglia One, a project which will generate capacity of 1,200 megawatts (MW). It will create up to 2,700 jobs during construction and could power 820,000 UK homes.

This is the first of six planned 1,200MW phases within the overall East Anglia UK Round 3 offshore wind zone, which could eventually comprise up to 7,200MW.

For Iberdrola, its annual investment in the UK has more than doubled since the integration of ScottishPower into the firm in 2007, up from £600 million in 2006 to £1.2 billion in 2013.

Iberdrola CEO Ignacio Galan told UK energy and climate change secretary Ed Davey in June that “the very large investments that Iberdrola is making in the UK are important in securing energy supplies for the country in the future”.

Bilbao’s Athletic Club, one of Spain’s most successful football teams, was formed in 1898 due to influx of British engineers and businesspeople who came to build railways and steelworks. The club’s origins can still be heard on match days when fans chant “Aliron”, a word that derives from “all iron”, which was shouted by miners when they discovered a seam of good ore.