Interview with Bjarni Benediktsson, minister of finance and economic affairs 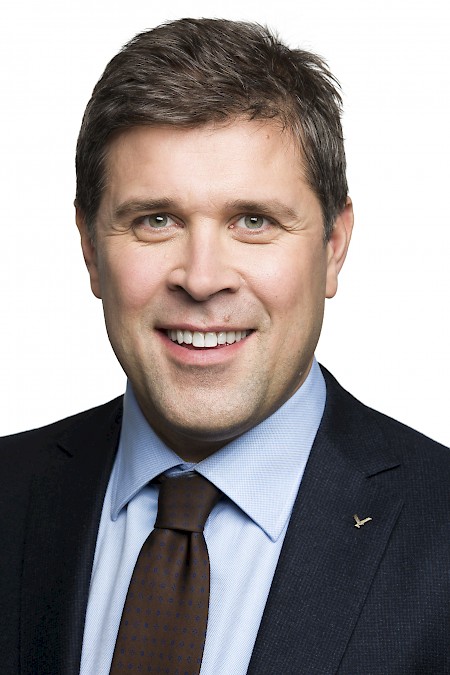 Bjarni Benediktsson, the leader of the Icelandic Independence Party, has held the post of minister of finance and economic affairs since May 2013. He spoke to The Report Company about Iceland’s recovery from the 2008 crisis which roiled its banks, and shared his optimism for the future.

The Report Company: How difficult were the first years after the crisis?

Bjarni Benediktsson: We had very dramatic problems. At the same time, income was coming down so this called for a very swift adjustment to the new reality of a less valuable Icelandic krona. Now, when you put on top of this the fact that we had to introduce capital controls and trust in the Icelandic economy decreased, I’d say the initial one to two years were the most difficult ones but we have managed quite well since then.

TRC: To what would you attribute Iceland’s recovery?

BB: If we look at what was decided as early as 2008 in terms of how to deal with the crisis, I think that there were a number of policies that were critical. The first was that we did not try and nationalise the private debt that was causing the whole problem. It was the private debt of the banking sector that was causing the underlying problem, and we took the right decision in not trying to save the banks, and by saving the banks I’m referring to nationalising the debt and taking on the debt. Instead, what we did was to re-establish healthy, new, domestic banks, and a lot of private credit had to be written off. This was the first critical policy decision that was very successful.

Secondly, I think introducing an economic plan with the IMF was also important, trying to establish how to go forward. It was important to create from the very beginning a pathway which we would follow, and the way that we could maintain our expectations going forward. The policy that we had followed until the crisis, which was to keep public debt very low, was crucial. The fact that Iceland had very low debt levels when the crisis occurred, put us in a position to better deal with the situation. If debt levels had been very high, then we would not have had the opportunities or the possibilities that we had in taking on new debt to boost the reserves and refinance the new banking system.

“During the crisis, many of our neighbours and allies felt that it was a tragedy that we had been affected so much”

TRC: Ratings agencies have recently upgraded their outlooks for Iceland. What does this mean for this country?

BB: I think it has many important meanings. Number one, it is a signal that we are back on track and that we are succeeding in rebuilding the economy. Secondly, it will of course immediately affect the terms on which both the private and the public sector will be able to approach the financial market. It adds credibility to the policies that we have been following.

TRC: How would you appraise the image of Iceland internationally following the crisis and the volcanic eruption that put the country on the map?

BB: I think people are right in pointing to these two incidents as something that drew attention to Iceland, but we cannot underestimate the effect of the lower exchange rate, which made it more affordable to come to Iceland.

We have always enjoyed a pretty favourable kind of attitude towards our culture and our business life. We are not a big military force in any way, we are far away from any other neighbouring countries, we are a relatively scarcely-populated island, and we are not a big threat to anybody. In that sense, we have always enjoyed a pretty favourable image. During the crisis, many of our neighbours and allies felt that it was a tragedy that we had been affected so much, but this has turned around in a relatively short period. A lot is being said at the moment about the turnaround, and we feel that people are very positive and happy that we are back on track.

“We are enjoying the longest sustained growth period in recent history”

TRC: What is your forecast for the coming years?

BB: At the moment, if forecasts come true, we are enjoying the longest sustained growth period in recent history. Our challenge throughout this period will be to try and maintain stability, maintain low inflation and lower interest rates. We are in a very favourable situation, but we need to make sure that we continue to take the right decisions so that the negative effects of a growing economy do not affect us.

TRC: What are the main sectors for future investment?

My firm belief is that the politicians should not say where exactly the investment should take place; we just need to create the general environment to make investment possible. For that, I think stability is crucial. The entrepreneurs, the education system and the younger generation will take advantage of the favourable environment and tell us where we are headed for in terms of investment for the future.

TRC: What would you like to tell people about Iceland?

BB: I would like to welcome people to come and visit Iceland. I believe we have a lot of exciting things to offer. We are on a yearly basis increasing our infrastructure to attract tourists not only to the capital area but all around Iceland so people can see fantastic natural sites and natural phenomena. I also believe Iceland will draw the increased attention of investors as a healthy economy with a very skilled workforce and good public finances where we enjoy the full benefits of the internal market of Europe but still have the flexibility that come with being outside of full EU membership.