Caribbean islands are famous for their gorgeous tropical climate and sun-kissed sandy beaches, but those are not the only resources that Trinidad and Tobago is blessed with.

Producing about 4.3 billion cubic feet of natural gas and 82,000 barrels of oil every day, the country is the leading energy producer in the region and the seventh largest in the world.

Trinidad and Tobago’s energy production dates back to 1857, when it drilled the first oil well. In 1908, it began commercial oil production. Today, the energy sector comprises over 40 percent of its GDP and more than 80 percent of exports.

While oil was initially the main driver of the energy sector, the past few decades have seen gas take over. “Oil production has been a downward trend since the early 1980s,” explains Thackwray Driver, CEO of the Energy Chamber of Trinidad and Tobago, “but natural gas really ballooned in the mid-1990s to 2008, and a huge amount of investment took place.”

However, after decades of phenomenal growth, the country’s energy industry has plateaued, driven by a number of factors, as Eugene Tiah, chief executive of Phoenix Park Gas Processors, one of the largest gas-processing facilities in the Americas, explains. One is Trinidad and Tobago’s own “ability to sustain production at current levels, and the other is what is happening elsewhere globally in terms of the gas industry,” he adds.

The twin-island nation is facing new competition, not only from the Middle East’s emerging economies, where new gas reserves been found, but also from North America – particularly the United States, which has become the world’s top shale gas producer. Once a major buyer of Trinidad and Tobago’s gas, in 2012 the US imported just 19 percent of the LNG the nation exports, down from 80 percent previously.

Nevertheless, industry players remain upbeat, pointing to strong demand from markets such as Asia and Latin America which could ease the impact of US shale gas production. Trinidad and Tobago’s exports now go to the United Kingdom, Spain, Argentina, Brazil, Japan, China, Taiwan and South Korea. “It’s not all doom and gloom,” Driver says.

“The US becoming a gas producer is a big change, but the global energy demand is enough to suck everything up,” says Dirk Nuber, business development manager of joint venture services company Neal & Massy Wood Group (NMWG).

While most of the offshore energy reserves have been found in shallow water, Trinidad and Tobago has staked its bet on attracting investment in deep-water exploration. Following two auction rounds which resulted in production-sharing contracts with BP in 2011 and BHP Billiton in 2012, the ministry of energy in August 2013 launched another bidding round to attract deep-water investment, which set to close at the end of January 2014.

The country is also a building the US$80 million Galeota port that will be used as a hub for deep-water exploration. Other Caribbean countries will also take advantage of its state-of-the-art logistics. It is expected to be fully operational by the middle of 2014.

With 11 ammonia plants and seven methanol plants, Trinidad and Tobago is the world’s largest exporter of ammonia and the second largest exporter of methanol. In 2010, it started to produce melamine, a derivative of ammonia, in an attempt to strengthen the link between the manufacturing and energy sectors.

“Our resources are finite,” says Dr Vernon Paltoo, president of the National Energy Corporation of Trinidad and Tobago, “we have to leverage what we have to make sure that it is sustainable in the future, and one way of doing that is accessing new markets and new partners.”

With a long history in energy extraction and exploration, Trinidad and Tobago could also benefit from exporting its industry know-how. “In the services sector, many of our companies have ventured into the Americas and even as far as Africa,” says Bruce Mackenzie, executive director of ASCO Trinidad, an oil and gas logistics company.

“They have been welcomed because people have seen the Trinidad story of development, and they want to encourage a similar development story in their own countries.” 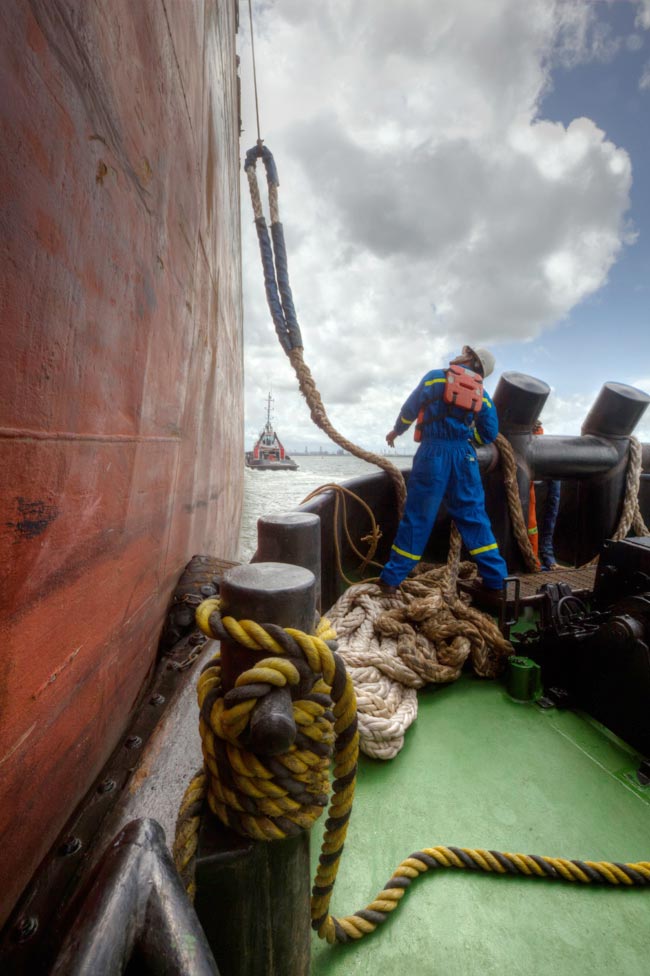 From oil field to gas giant

As far back as the late 16th century, European explorers including Sir Walter Raleigh would stop off to repair their ships using pitch from La Brea. Commercial production of oil from Trinidad’s rich petroleum fields started in 1908, while any natural gas produced was considered an inconvenient by-product and was usually flared. By the 1950s, foreign investors BP, Shell and Texaco operated refineries in the country and over 150 companies had been formed to develop Trinidad’s oil. A turning point came in 1953, when the country’s public electrical utility began using natural gas to generate electricity and by the early 1990s, the hydrocarbon industry in Trinidad and Tobago had transitioned to a predominantly natural gas-based sector. Atlantic LNG was formed to develop an LNG plant in Point Fortin, and in 2004 the country became the western hemisphere’s leading LNG supplier. Today, natural gas makes up almost 90 percent of the country’s natural resource base, with BP producing around 60 percent of the country’s gas, and British Gas nearly 25 percent. 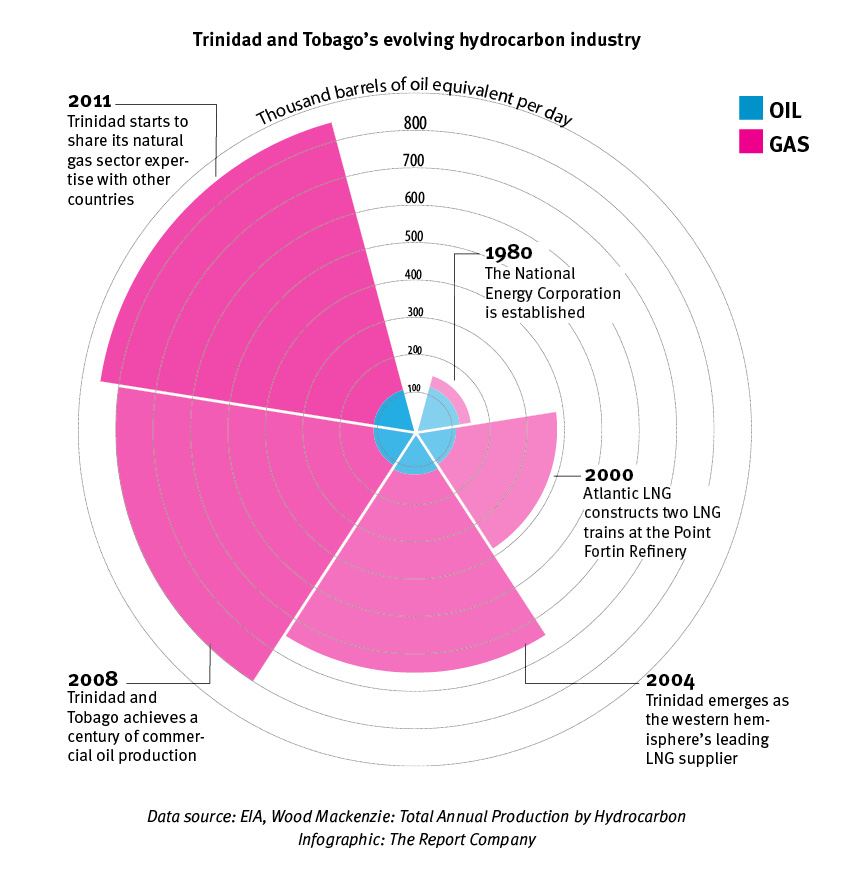 Despite an abundance of oil and gas, Trinidad and Tobago is also pursuing the development of renewable energy.

“We have very competitively priced energy, so it’s a challenge to make alternative energy economically viable,” says Dr Vernon Paltoo, president of the National Energy Corporation, “but we recognise that it is the future and we need to make it happen here sooner rather than later.”