Despite a shifting U.S.-China trade relationship, Alaska’s independent governor Bill Walker and Chinese President Xi Jinping have been building a fruitful relationship. With complementary economies and strategic geographical links, increasing cooperation between the resource-rich state and the world’s most populous country has become a goal for both leaders

When President Xi Jinping made an unexpected stop in Anchorage to refuel his plane on the way back from his first meeting with President Donald Trump in Florida, it was clear that the historic layover was about much more than logistics.

As the airplane landed in April 2017, carrying 14 Chinese ministers and Chinese first lady Peng Liyuan, Alaskan Gov. Bill Walker and his wife Donna Walker eagerly greeted the delegation on the tarmac that offers views to snow-capped mountains. After the warm welcome at the airport, Walker acted as a tour guide to showcase some of the beauty of his state, bringing the Chinese President and his wife to Beluga Point, a rocky beach that flows into the wild northern Pacific. Later, they enjoyed a dinner of fresh Alaskan salmon. 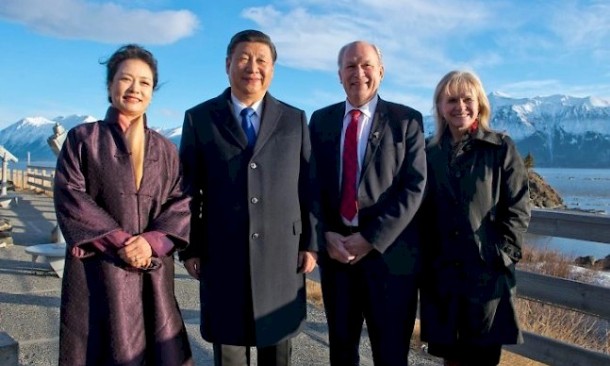 “[Alaska’s relationship to China] is almost a personal thing. The time we spent here with President Xi and Madame Peng was a very close experience… it is a really important relationship at this time between the state of Alaska and China and a great opportunity for both,” said Walker, adding that shortly after the meeting, the Alaskan first lady received a personal invitation to be a keynote speaker at a women’s conference in China.

Xi was impressed with the state’s beauty and the hospitality he received, describing Alaska as a “Shangri-La” and pointing out that China’s cooperation with Alaska is one of the most dynamic aspects in China-U.S. relations.

““[Alaska’s relationship to China] is almost a personal thing. The time we spent here with President Xi and Madame Peng was a very close experience””

China has been Alaska’s biggest trade partner for the last several years, with Alaska exporting around $1.32 billion worth of goods to the Asian powerhouse in 2017. Due to the geographical proximity, Alaska’s seafood, natural resources and other goods have seen strong growth in the rapidly growing Chinese market, and tourism is another area that holds great potential.

Since that meeting and despite tough rhetoric from the U.S. president in regard to trade with China, the leaders of Alaska and China have continued to foster the diplomatic relationship and worked to deepen economic ties.

Months after Xi’s visit to Alaska, Walker found himself in Beijing in front of the presidents of both China and the United States, and this time it was not a spontaneous visit. On Nov. 9, Walker signed a joint agreement with Sinopec, China Investment Corp and the Bank of China to work together to build a gas pipeline worth $43 billion that would allow Alaska to export an estimated $1 trillion of natural gas to China over the next 100 years. More steps are needed to solidify the project, but Walker is optimistic that it will become a reality. 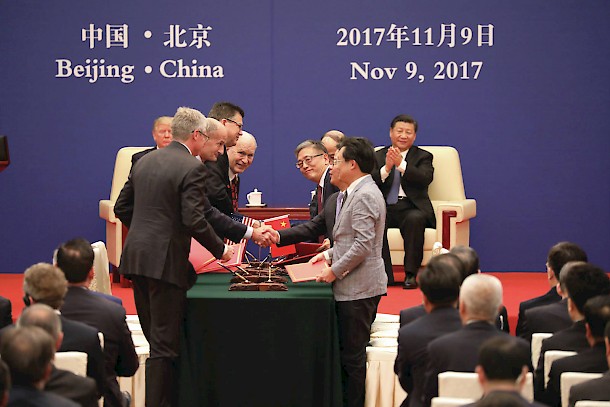 Walker peeks out for a photo during the signing of the LNG pipeline agreement in front of the presidents of the U.S. and China. Photo: Office of the Governor

Since November, Walker has visited China twice more. On the latest journey, he was accompanied by 26 entities for the Opportunity Alaska trade mission to China, where a wide range of Alaskan businesses showcased their products to influential Chinese businesses such as Alibaba Group. As a result, MOUs were signed on tourism cooperation and the training of Chinese athletes in Alaska for the 2022 Beijing Winter Olympics, and progress was made in securing a direct flight from China to Alaska.

“I ran for office because I’m a hunter of opportunities for Alaska. The opportunity with China really fits into my passion and my goals for Alaska,” said Walker. “I’m looking forward to developing this incredible relationship.” 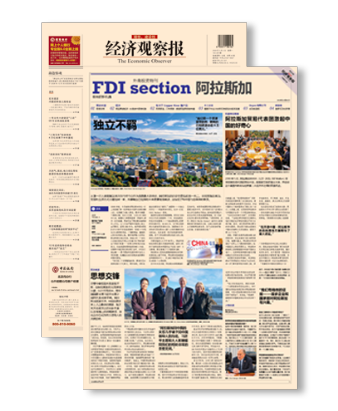 This article was published 22 October 2018
in partnership with: 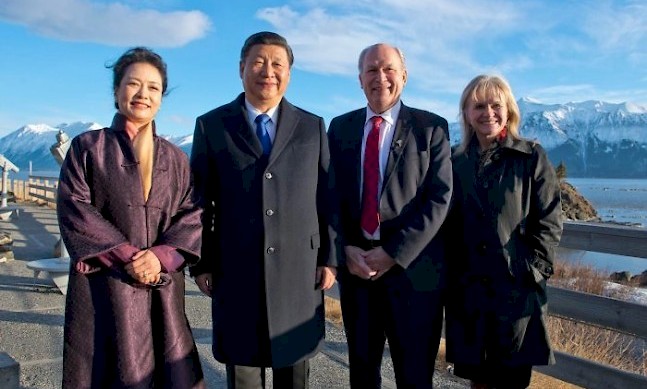