The state is investing heavily in training and logistics to create the southern hemisphere’s newest breeding ground for technological start-ups. In this new fertile environment, small and mid-sized companies look set to flourish

Sao Paulo state’s contribution to the economic map of Brazil is phenomenal. Representing almost 40 percent of the country’s GDP, it has an output equal to Switzerland and the weight of the nation on its shoulders, but it has also been underperforming. The focus now is on supporting previously overlooked mid-sized companies to uncover the star of tomorrow. Hopes are high that Sao Paulo can create a Facebook or Google of its own to underscore its efforts in boosting entrepreneurial creativity.

The explosion of investments over the last decade in vocational training, the creation of major new institutions like UFABC and the rise in distance learning have all helped decentralised the knowledge base from the main metropolis. Today, smaller companies are just as likely to look to the interior of the state, where there is an increasingly skilled workforce, improving infrastructure and world-class logistics.

The vital interplay between research, private investment and government support is becoming easier thanks to its prioritisation by agencies like Fapesp and Investe Sao Paulo. The latter, created in 2008, is responsible for facilitating investments in the state and helping boost exports. “Sao Paulo represents the best of Brazil in terms of technological innovation and products with aggregated value,” says Juan Quiros, president of Investe Sao Paulo, “but efficiency needs to improve. We need not look at the future of Brazil but build the present”.

To that end, under the state’s present governor Gerardo Alckmin, investment in the Sao Paulo Technology Faculty (FATEC) has boosted the number of units throughout the state from 16 in 2004 to 63 today. State investment in its headquarters, the Centro Paula Souza, also rocketed from R$252 million to R$1.8 billion in that same period, allowing these FATECs to offer broad as well as niche courses focussed on the market’s needs.

The rise in student numbers is in sharp contrast to the prevailing opinion that such courses are no longer relevant to students. “Regular education doesn’t motivate them. They need training that is relevant to their reality, that is organised, safe and connected,” says Laura Lagana, director of the Centro Paula Souza. “Since we have more students than seats, candidates have to be selected, so they have to study to get in. If they have to study, it means they really want it.”

The state also helped fund the centre’s schools in two of the poorest suburbs in the city of Sao Paulo, Heliopolis and Paraisopolis, as well as creating the Neither/Nor initiative to give training opportunities to underprivileged and vulnerable youth. Offered basic courses in tourism, culture, road safety and first aid, they have the opportunity to become ‘municipal coordinators’ under the employment of the state. It is progressive measures like these that underpin a concerted effort to reach Sao Paulo’s huge and varied demographic. 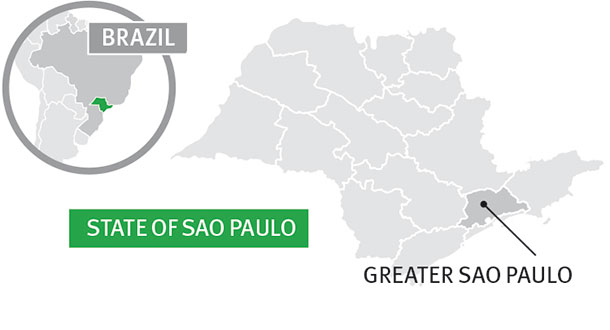 Located in Brazil’s south-east, the state of Sao Paulo, the country’s most populous, is divided into 15 administrative regions, of which the metropolitan region of Sao Paulo is its most economically important. The state currently has 218 ETECs (state vocational colleges) and 63 FATECs (state technological colleges)