The third-largest industrial centre in Brazil, the ABC region is developing beyond its car-manufacturing past and into the realm of a high-tech hub

The Brazilian government could be accused of a somewhat passive approach to manufacturing and innovation in the past, but the ABC region of Sao Paulo is becoming a beacon of proactive policy. The cities of Santo Andre, Sao Bernardo do Campo and Sao Caetano do Sul have enjoyed mixed economic success over the last 30 years, but a recent wave of public and private investment means that the Greater ABC region is once again acting as an autonomous hub with very much its own agenda and appeal.

Located between Sao Paulo city and the port of Santos, there is more than geographic advantage and a strong industrial history behind the region’s success. Studies by Fiesp have shown the huge impact of companies like Volkswagen as they are drawn to the area’s evolving infrastructure, in turn creating manufacturing clusters as support companies move in. It is something that the Intermunicipal Consortium, the entity that has represented the seven municipalities and 2.7 million inhabitants of the Greater ABC region since 1990, has been communicating to state and federal bodies in a bid to modernise and develop the area’s potential.

“We are an innovative region in every sense”

The consortium’s strength lies in its diversity of vocations, but it is a diversity being funneled through one overarching strategy representing all of its members. The mayor of Sao Bernardo, Luiz Marinho, has long held positions of influence in the local unions, but through his presidency of the consortium in 2013-2014 and still now through his vice-presidency, he helped align the Greater ABC’s ambitions with those of the federal government. “My main focus is always Sao Bernardo,” says Marinho, “but I also have the job of leading communications not only between the other mayors in the region, but also with the state and federal governments. The goal is to produce a regional strategy, not several city strategies.”

The potential of a skilled workforce and burgeoning research partnerships is largely thanks to the continuing growth in the number of FATECs and the impressive new UFABC university. Their presence has paved the way for the arrival of companies like Saab, currently building a R$150 million plant in which the Swedish company will piece together Brazil’s 36 new Gripen fighter planes. Other companies, such as Germany’s robotics giant Kuka, have been enticed away from metropolitan areas by the ABC’s impressive differentials.

“Before everything, we train our students to think like entrepreneurs”

Such arrivals have also given an added impetus to reinvestment in private universities like the Maua Institute of Technology. The Sao Caetano campus will get a R$15 million facelift in the form of new laboratories for courses including engineering, microbiology and biochemical engineering.

There are limits to the region’s autonomous ambitions, however, and while the municipalities can apply for loans from BNDES, the consortium as a whole cannot. But if an investment does not fit one municipality, the fact that each one follows its own vocation means that there is invariably another close behind ready to pick up the negotiations. With companies like Mercedes Benz investing millions to update their existing operations rather than look elsewhere, it gives the green light for others to follow.

“The message to the ministry of development is that we don’t want to have to go into fiscal battles to attract investors. We’d rather take good care of our current industrial facilities. If they are satisfied with the region, they will naturally attract other companies and investors. We are, of course, also seeking new industrial sectors in the region, principally tech companies.”

The ABC’s infrastructural development also adds to a growing regional mobility that has dovetailed with the government’s push to open up the ‘economy of the interior’. The revamping of regional airports and emphasis on a better-trained workforce is broadening and strengthening Sao Paulo’s economic base, and that of the country as a whole. 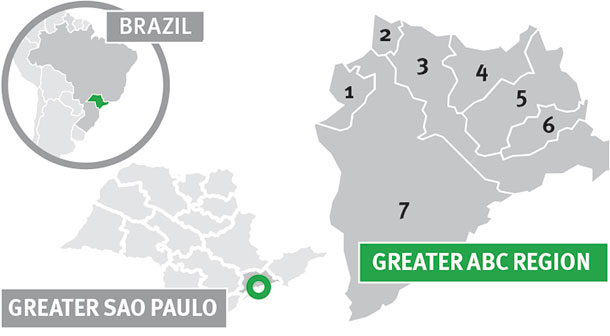 The Greater ABC Region, made up of the cities of Diadema(1), Sao Caetano do Sul(2), Santo Andre(3), Maua(4), Ribeirao Pires(5), Rio Grande da Serra(6) and Sao Bernardo do Campo (7), is in the south of the metropolitan region of Sao Paulo, and has become a powerful industrial centre 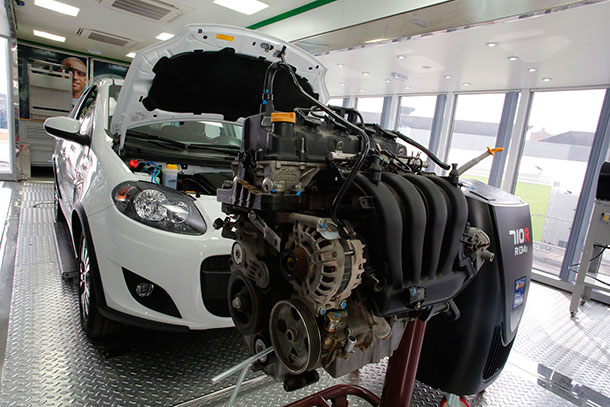 The ABC’s ambitious target of moving from Brazil’s automobile epicentre to becoming the country’s aerospace hub received a major boost from Saab, leading to a study from the Economic Development Agency to analyse its potential. The Greater ABC region currently has 28 companies that operate in the aerospace field, the majority of which are found in Sao Bernardo de Campo. “One of the conditions of the contract for Brazil’s new Gripen jet was that Saab build a unit in Sao Bernardo de Campo”, says the city’s mayor, Luiz Marinho, “and that has in turn been attracting a lot of new companies.”

These are precisely the kind of high-impact projects that the Intermunicipal Consortium is trying to attract and that would cement the industrial future of the area. It is a complex production chain, however, for which investments dwarfing those already poured into the region would be required.