A rich history and strategic location has helped Malta create a strong marine industry. Now, new opportunities are being developed in the sector as the country’s maritime flag draws further confidence.

Located equidistant from the Suez Canal and Gibraltar, and North Africa and Italy, Malta has long been sought after for its supremely strategic position, which saw it ruled by a succession of powers from the Phoenicians to the Romans all the way to the British, until it gained independence in 1964.

Each new wave of rulers left their maritime footprint on the islands, and not only was Malta attractive for its geographical positioning but also for its harbour, one of the world’s deepest.

Today, Malta has steadily built upon this rich maritime history to remain a key player in the region in shipping, bunkering and ship repair.

Established in 1988, Malta Freeport Terminal has played an active role in the development of the country’s transhipment industry – moving containers from one ship to another. Over 96 percent of the terminal’s container traffic is for transhipment business, and it facilitates excellent direct shipping links to 117 ports globally, 70 of which are in the Mediterranean and Black Sea.

After privatisation in 2004, when a Chinese company became a small shareholder, the Freeport Terminal undertook a substantial investment programme to boost its transhipment credentials. The terminal can now handle one of the world’s largest container vessels, CMA CGM Marco Polo.

Further improvements, including dredging all mainline berths to a water depth of 17 metres, are underway to boost Malta’s standing as a maritime hub. “We are looking forward to establishing closer links now with the North African and Mediterranean region,” adds Farrugia. “Malta can also serve as a link to Asia.”

These links to Asia are nothing new. During the construction of the terminal in the 1980s, Chinese expertise was brought in to assist the building of the breakwater and the port itself.

“I’m looking forward to putting Malta back on the map when it comes to logistics.”

Now, this maritime relationship with China is likely to grow further as Freeport explores the idea of building a logistics warehouse, with Chinese involvement, based on the model in the United Arab Emirates' Jebel Ali.

“The idea is to have a one-third share held by the Maltese through Malta Freeport Corporation, one-third by a Chinese company and one-third by an Emirati company,” explains Farrugia, who plans to travel to Shanghai later in 2014 to close the negotiations the firm is currently conducting.

Farrugia’s other development plans include taking advantage of the close proximity of the airport to the terminal – 10 minutes away – to have stock containers coming into the port to be then delivered by airfreight. Other plans include enticing foreign investors to locate their operations within Smart City Malta and their warehouses in the new logistics and district park.

“We want to become the centre from where people can distribute throughout the Mediterranean and North Africa so as to serve as a hub,” adds Farrugia. “I’m looking forward to putting Malta back on the map when it comes to logistics.”

While a fabled maritime history, ideal location and strong infrastructure all play a part, it is the support mechanisms – trained local people and a strong regulatory and legal framework – that are also pushing Malta to the forefront in the maritime sector.

Mariner, a Maltese-based investor, developer, and operator of sea terminals and other logistic services, has been instrumental in the planning, designing and management of the building and operation of Malta Freeport Terminal. The company’s expertise spans from conducting environmental impact assessments to obtaining relevant planning permits for major terminals in Malta and internationally.

This technical expertise has led to the Maltese company operating terminals in important European ports, including Venice, Riga and Durres. The company’s chairman, Marin Hili, reasons that the company’s – and Malta’s – marine success is due to very good human resources.

“Malta’s maritime sector has developed very well and is always at the forefront of our government’s priority to optimise our location and our human resources,” he says.

Seventh-largest registry in the world

Over 6,248 ship registrations make Malta the seventh-largest registry in the world

Excellent direct shipping links to 117 ports globally, 70 of which are in the Mediterranean and the Black Sea

One of only two open registries in the EU, meaning open registrations to Maltese and non-Maltese nationals

Although Malta is one of the smallest countries in the world, it boasts the seventh-largest international ship registry, numbering over 6,248. The Maltese eight-pointed cross also flies above the majority of European ships.

“We are the largest registry in Europe, but we’re not just a register,” says Dr Fenech, managing partner at Fenech & Fenech law firm. “We are truly a maritime nation.”

A strong legal framework is, according to Dr Fenech, the reason for so many registrations taking place in Malta. This registry not only comprises cargo ships and oil tankers but in the last 10 years has also seen a steady increase in the number of pleasure yachts, including 400 super yachts – those vessels measuring 24 metres or more in length.

According to Fenech & Fenech, the reason for this growth is simple. Malta’s maritime flag has passed the test of the most demanding ship owners and financiers while ensuring full respect and compliance with international conventions and European directives and regulations. The body overlooking ship registries, Malta Transport, is keen to emphasise their maritime flag as one of confidence rather than convenience.

Recent moves by the Maltese government, including privatising and developing marinas, boosting repair facilities for super yachts and offering reduced rates of VAT, showcase the importance given to the maritime sector. Offering a 24-hour, seven-day-a-week service, the Maltese Shipping Registry is keen to attract further registrations that entail no restrictions on the nationalities of shareholders of Maltese companies or the crew onboard Maltese yachts.

“When it comes to shipping we have been working for Asian interests for the past few years.”

Further infrastructure plans are on the horizon with the government in discussions with Freeport to reclaim land near the terminal – an ideal location boasting the deepest sea floor of the island’s coastal waters. Expansion of shipping lines and attracting further investment to transhipment are part of Freeport’s plans, as well as further tapping into Malta’s enviable geographic positioning.

“The fact that right now the North African countries are going through big changes not just constitutionally but even economically means that this is the time for us,” says Dr Farrugia. “It’s now or never and we can play a very strategic role.”

A maritime centre of excellence 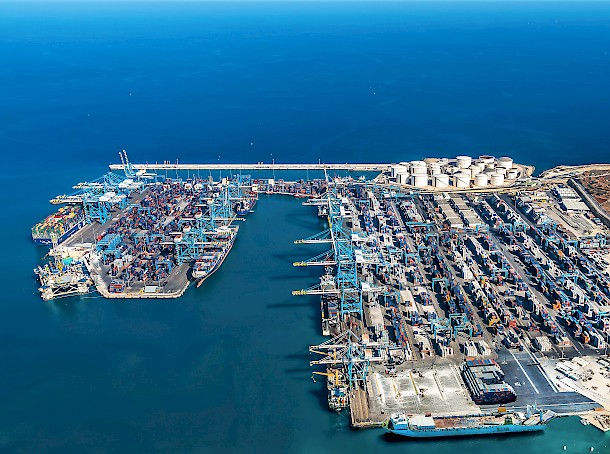