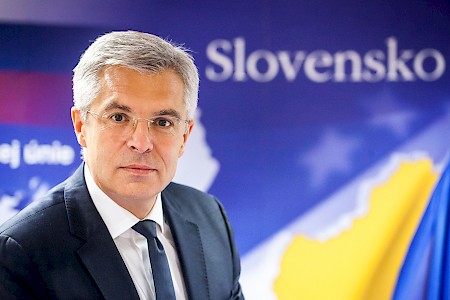 Ivan Korcok has been a key figure in his country’s foreign policy since the modern state of Slovakia came into being, becoming minister for foreign affairs in 1992 and playing a leading role as minister and ambassador in various missions since then.

This interview was conducted before Slovakia took on the six-month rotating presidency of the Council of the European Union on July 1, 2016.

The Report Company: What does Slovakia need to bear in mind ahead of its presidency of the Council of the European Union?

Ivan Korcok: I see three points that the country has to bear in mind when preparing for the presidency. Number one, you have to invest heavily in preparation. Your programme must be ambitious enough, but realistic when it comes to expectations. Second, you also have to invest well in advance in communication with your main partners and institutions, and therefore we are communicating with and informing the European Parliament about our intentions and our plans. The same goes for the European Commission. We need to ensure that we explain clearly what our expectations are vis-a-vis these two important institutions. The third point is that you have to be prepared for the unexpected. You cannot envisage what kind of surprises you will confront during that semester, so you have to guarantee the ability and good performance of those people representing the presidency. The worst thing that can happen would be that you start with a big announcement that is unrealistic. We want to be ambitious, but we need to avoid the temptation to be overambitious. We cannot make our programme a Christmas tree where we hang everything on it so that everyone finds their own decoration there, because after six months we have to be accountable for our performance.

TRC: What does holding the presidency mean for Slovakia?

IK: In a way, it completes the journey of my country as a member state, which started 12 years ago in 2004, because a country that has not experienced the presidency has not seen everything in the EU from the inside. I think it will be a huge responsibility.

TRC: What impact can Slovakia have on EU policy during its presidency?

IK: In terms of changing the course of this vessel, the European Union, that’s not our intention at all. Our intention is to focus on very specific areas where we can make realistic deliveries. We have a clear basis from which we will launch our presidency. We have relative clarity on what the intentions of the European Commission are when it comes to the presentation of specific legislative proposals, and therefore this is the basis for us, combined with the identified areas on which we want to make real progress. When it comes to the energy union, the Commission will open important files on issues such as gas supply security. This falls under the Slovak ambition to make progress when it comes to negotiations on intergovernmental agreements, and the proposal for energy security. We have our own plans, but not unrealistic ambitions to completely change things in just six months.

TRC: You have identified the digital single market and the energy union as key topics. Why?

IK: This is for two reasons. Our presidency has identified two major principles through which we are now identifying our priorities. Number one is to help overcome fragmentation in the EU, and the second is to achieve concrete results. In both energy and the digital market, you see fragmentation. This is a huge opportunity to deliver concrete and tangible results for our citizens. Take the digital single market; there are two important issues for us. Number one, we very much appreciate the recent presentation of a draft proposal by the Commission on geo-blocking. The second important issue here in the area of digital economy is data portability. Overcoming fragmentation here will deliver results because if we tackle geo-blocking, people’s lives will be made easier as they have better access to digital content. There will be no discrimination in the digital economy on the basis of your nationality or the place from which you are trying to order goods or services, and this is extremely important.

TRC: What are your priorities around the Eastern Partnership and EU enlargement?

IK: Let me start with enlargement. It is not surprising that a country like Slovakia, which has been a very strong supporter of enlargement, should make this one of the issues on which we would want to focus. But let me clarify: we want to ensure that there is a clear balance. Countries negotiating membership know exactly what they should do in order to get close to the European Union. They know exactly what is expected of them. But there must be a political response to this. Once a country delivers on that, it has to feel that it is making progress towards the European Union. By this, we don’t want to accelerate the process unrealistically, but we want to be ready as a Council to respond accordingly to those countries that are making progress, because we believe that enlargement must remain the most important instrument of the European Union when it comes to our neighbourhood. This gives us huge leverage to encourage the countries negotiating membership to make progress, especially when it comes to reforms. We have a very similar approach to the Eastern Partnership. Of course, this is a different workflow, but we see that there is a real differentiation under the Eastern Partnership. There are frontrunners, like Georgia. There are clear possible deliveries where it comes to Eastern Partnership in the area of mobility and visa liberalisation. I believe that the recent developments in the southern and eastern neighbourhoods of the EU underscore the need to pay attention to the most important instruments of our neighbourhood policy. Our objective is to ensure that we use them as an instrument to stabilise our neighbourhood.

TRC: What are the main challenges ahead?

IK: The challenge of any presidency is uncertainty, and this is even more intense in our case. And the Slovak presidency will continue to take place in a time of uncertainty in the European Union, whether we like it or not. The overarching point from which we start our presidency is this uncertainty when it comes to migration. It is very difficult to predict, but we are confident that migration will not continue in the same dimension as it did last year and during the first half of this year. We hope we can still maintain control when it comes to Western Balkan routes, on the basis of good cooperation with our partners, especially Turkey. At the same time, we hope that we will not be confronted with an escalation on the central Mediterranean route, but there is uncertainty. I think it is fair to point to another point of uncertainty, and that is the UK referendum. This decision that will be taken by UK citizens will very much influence the EU in general. We hope that UK citizens will express their trust and confidence in the European Union, but there is uncertainty about the outcome. Basically, in order to achieve our goals, we need to have a favourable environment, and the smaller the risks, the better for us. But we remain confident.

TRC: What will be the themes of the Slovak presidency?

IK: Our priorities will have four major thematic building blocks. The first will deal with the economy and financial affairs with a clear focus on investments, sustainable public finances, and trying to create conditions for economic growth. The annual budget should be on the table during our presidency. We need to look at what we can do in order to boost investment in Europe. There is the Juncker plan, which will be reviewed, but we would like to have an open discussion about its future. We also want to make major progress towards creating a capital markets union. This is key to ensure that SMEs in Europe have better access to capital. We also support further steps towards completing the economic and monetary union. The second block is the single market, and we have already dwelled on that. It refers to the digital single market and the energy union. Then the third block is migration. We are hoping not to be doing crisis management, but rather to implement the steps that we have agreed: control over external borders and implementation of our agreements with Turkey. What is key however is that we focus on the external dimension of migration because it would be fiction to believe that over the long term we can manage the challenge of migration unless we engage our partners in Africa. We have to use the tools that we have to hand such as development assistance. The fourth building block is how to make Europe globally engaged and strong. Here, enlargement is important in the way that I have described. During our presidency, we should have clarity on TTIP, the free trade agreement with Canada, and market economy status for China, which is extremely important and sensitive and will impact strongly on the European economy.

TRC: Will the presidency have the potential to change the way Slovakia is perceived in Europe and vice versa?

IK: When it comes to our own perception of the European Union, I think the responsibility of holding the presidency can only add to it. We will also have to put aside our strictly national perspective and put to the forefront the interests of the EU as a whole. This will be a good experience for us. After the presidency, I am confident that we will put tangible results on the table and help regain the confidence of EU citizens in the bloc. This is a unique opportunity for our country to present itself in the European Union and beyond, and therefore we will want to present our country not only as a president chairing meetings, but in the way we show our culture, our young people, our entrepreneurs, our start-ups, and we are looking forward to receiving the thousands of people who travel to Slovakia for negotiations, and hoping that they will later on come and visit our country as a tourist destination.