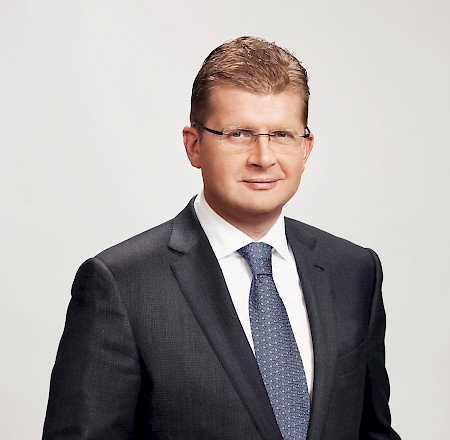 Before entering politics, economist Peter Ziga led various private companies before serving as advisor to the head of the Slovak Investment and Trade Development Agency (SARIO). He served as state secretary at the Ministry of Economy from 2006 to 2010, and was named environment minister in 2012 before becoming economy minister in 2016. He spoke about the health of the Slovak economy and the priorities for growth.

The Report Company: How has your political career evolved and is your new position leading the economy influenced by the fact that you are a former environment minister?

Peter Ziga: I first joined the Ministry of Economy in the 2006 to 2010 period, during which time the financial crisis hit. The Slovak economy was particularly impacted, because our economy is a very open one. But today it is obvious that we handled the situation successfully.

After the 2010 elections, we went into opposition for a short period of time. In 2012, early elections were held and that’s when I became the environment minister. We were facing substantial challenges because of global climate changes, so with the assistance of European structural funds, we put major investment into climate change preparedness, such as flood defence systems on some of our major rivers, as well as building infrastructure such as sewerage systems in those municipalities where there were none before. In 2015, signatories to the Paris Agreement, including Slovakia, committed to keeping the average global temperature increase within two degrees.

This brings me to my current appointment as economy minister, because my portfolio covers energy and industry, which both relate closely to the planet. The European Union is a leader in implementing ambitious goals in order to tackle and react to climate change and we in Slovakia subscribe to all of these major targets in this particular field. We have agreed with the EU on a 40% reduction of greenhouse gas emissions and that 27% of our electricity generation will come from renewable sources. These are the large, Europe-wide policies that we have to work with here at the Ministry of Economy. However, we do have our own internal policies where we look at industry, energy efficiency and customer protection. We have to customise these policies internally under the umbrella of the overall European framework.

TRC: What are the pillars of economic growth for Slovakia?

PZ: For some years now, Slovakia has been one of the fastest-growing economies in the entire EU. During the previous election period, we were a single-party government that provided a unique opportunity to conduct structural reforms that are now bearing fruit in our good economic results. The economic growth itself has been very positive, but there are also other positive indicators such as the level of debt, which has been kept below 55% of GDP. The unemployment rate over the last four years has been dropped from 14% to the current 9.6%, which, again, is a very good macroeconomic indicator.

Slovakia is a heavily industrialised economy, and 25% of our GDP creation relies on industry. Over the past 15 years, the major investments made in this country have shifted our economy gradually towards that industrial focus that we have today, and what we are now seeing is the result of those substantial investments. The economy has been geared strongly towards the automotive industry, although there are four main pillars of growth. Automotive is one of them, but electronics is another – for example, in 2007 Samsung built a major assembly plant here. There are only three such factories in the world: one in America, one in South Korea for the Asian market, and for the European market, it’s here in Slovakia. Additional pillars are the steel and chemical industries. These remain our main pillars that we would like to build upon for the future.

“My intention is to keep Slovakia competitive, not only at the European level, but globally”

TRC: What are you doing to promote economic diversification?

PZ: We are glad that the Slovak economy is built on such strong pillars. However, our economy is not entirely a manufacturing economy. Whenever we hold discussions with both existing and potential investors, we push very strongly for them to consider establishing not purely a manufacturing base, but also research and development facilities.

Looking at the horizon of 20 or 30 years into the future, we will most likely not be able to hold on to all of our manufacturing base, as businesses can also seek out cheaper labour or more favourable conditions in other markets - so for us R&D is still a largely untapped potential focus for our future.

In 2015 we obtained the largest investment the EU has seen in the past seven years in the shape of the Jaguar Land Rover deal. We competed for this investment with our neighbours and with Mexico as well. Putting Mexico aside, when you are speaking about the countries in our neighbourhood competing for such a major investment, you play your game on an open market, offering your incentives to the potential investor. However, there is a limit. The EU regulates how far each country can go, and the cap is equal for all. We were offering the same incentives as the Czech Republic and Poland, for example. But they chose Slovakia. What tipped the scales in Slovakia’s favour were not really incentives, but our very skilled and capable workforce, our favourable taxation environment, stable legislative environment, and stable political environment. In other words, Slovakia is a stable country for investors.

TRC: Does the Jaguar Land Rover investment mark the beginning of a new era of business relations with the UK?

PZ: I believe so. Why should we only have German, Austrian, French or Korean investors here? I believe that based on Jaguar Land Rover’s experience, Slovakia will attract more and more British investors in the future, not only in the automotive but also other sectors. Of course, we won’t rest on our laurels. We will proactively seek out investors continuously, whether it be directly from the Ministry of Economy or through our agency SARIO, which has been established for that very purpose.

“90% of existing investors would invest in Slovakia again”

TRC: What incentives are there to attract British investors?

PZ: We are not proposing tailor-made legislation for any specific country. In general, we approach any investors that may find Slovakia interesting, and those investors with good intentions that could come to Slovakia not only to do business, but also to create new jobs. We think that the legislation we already have is good. We do make certain amendments to attract investors, such as one that we adopted in 2015 that was specifically geared towards innovation. Any investor wishing to set up an innovation-related project in Slovakia can write off 25% as tax-deductible.

TRC: What is your immediate priority agenda for the energy sector?

PZ: In energy, the priority would be to try to continuously provide a greater degree of energy security for Slovakia. Slovakia is heavily dependent on the import of raw materials from abroad, and that goes equally for oil, natural gas and nuclear fuel. Slovakia is very much in support of the EU’s energy union, which has several major pillars, including energy security, stable supply and the interconnection of different networks. For the future, we are considering a gradual introduction of more and more renewables as and when they become attractive and economically viable.

PZ: The future development of the Slovak economy depends very much on external factors. Our economy is up to 85% dependent on exports. My intention is to keep Slovakia competitive, not only at the European level, but globally. We will continue striving to improve our business environment, not only for foreign investors and foreign businesses, but for the domestic market as well. We will do that by lowering and easing administrative barriers and improving the education sector in order to respond flexibly to the requirements of the market.