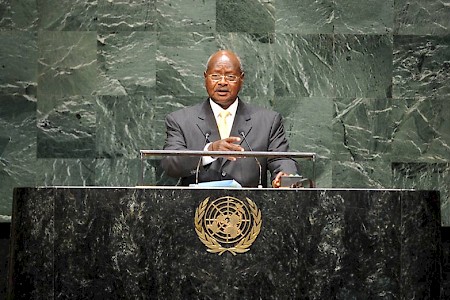 Yoweri Museveni has long put many western observers in something of a moral dilemma. On the one hand he has remained in power since 1986, backtracking on his promise to step down after the 2006 elections and in the process becoming one of Africa’s longest-ruling leaders.

However on the other hand, there is little doubt that he has provided a much-needed steady hand for Uganda, a country that had endured two blood-soaked and chaotic decades before he came to power.

After all, recent examples across Africa and the Middle East demonstrate how western ideals of regular change in government don’t always work so smoothly elsewhere.

“We have stability while many of our neighbors don’t,” he emphasizes. “That security comes from my vision.”

Western donors and governments alike have at times felt uneasy over his continued presence in power, but in such a volatile region which has been witness to so many vicious tribal and sectarian conflicts, Uganda is vitally seen as a beacon of peace and dependability.

Since introducing his ‘National Resistance Movement’ system of politics in 1986, which rewards merit rather than tribal affiliation, Museveni has understood the importance of having a pluralistic society. Without this, he argues, “how can you build stable national institutions?”

In 2006 he allowed multi-party elections for the first time since coming to power, and again in 2011, but both times he came out the comfortable winner, buoyed by a broad sweep of support across Uganda’s tribal, sectarian and regional lines. It is stability and prosperity that form the backbone of his presidency and which seem likely to propel him to victory again in 2016.

“Uganda currently has an estimated 9,000 troops – a fifth of its armed forces – based in regional conflict zones.”

Regional affairs - Uganda makes its mark on the region

Uganda may be a relatively small country in comparison to some of its giant neighbors, but it has been playing an increasingly important role in regional affairs during Museveni’s presidency, both militarily and politically, becoming a key US partner in Africa in the process.

When Museveni swept to power in 1986 he inherited a country fractured and devastated by two decades of turmoil and conflict. After succeeding in driving various rebel groups outside of its territory, Uganda’s battle-hardened armed forces were soon deployed to solve some of central and eastern Africa’s myriad conflicts, allowing Museveni to emerge as a guarantor of regional security.

Today Uganda has an estimated 9,000 troops stationed around the region playing a vital role in containing conflicts. Uganda is one of the key contributors of troops to the African Union’s combat mission in Somalia to drive back the jihadist group al-Shabaab, while Ugandan troops are also at the forefront of efforts to broker a peace deal between the two warring factions in South Sudan’s increasingly bitter civil war.

This willingness to commit forces into regional conflicts where other African nations dare not get involved, has won Museveni and the Ugandan armed forces admiration as well as large-scale military and economic assistance from Washington, which sees it as a regional bulwark of stability.