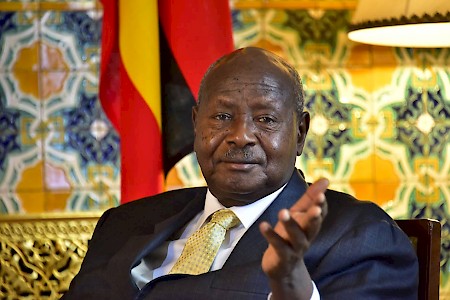 President of Uganda since 1986, Museveni is admired by many Ugandans for his work in revitalizing the country, providing political stability, improved infrastructure and overseeing continued economic growth. He spoke to The Report Company about his vision for the East African nation.

The Report Company: What challenges does Uganda face?

The entire population of Africa is either similar or linked. In the whole of Africa there are only four distinct groups, but many people don’t know this. We have four language groups: the Niger-Congo group which includes the Bantu dialects. That’s how you find that the language I speak is linked with what Mandela spoke. There are a lot of commonalities and similarities. Then you have the Nilo-Saharan languages, which are the languages of Southern Ethiopia and South Sudan. Then you have the Afro-Asiatic languages, which include Arabic and the languages of Northern Ethiopia. And then finally there’s a small language group called Khoisan in Southern Africa.

Therefore, Africans are either similar or linked. But the problem was that they were not governed together under one empire. They had multiple chiefs and multiple kings, and that created another problem. Because they were fragmented in terms of governance, when the colonists came it was easier to conquer them and to conquer Africa.

Now, when they were conquered, a new problem came in. Looking at Europe, it went through what I would call social metamorphosis. At the time of the French Revolution, the European society had four classes: the feudalists, the middle class or bourgeoisie, the peasants and the working class or proletariat. But if you go to Europe now, you will not find those. There has been a societal metamorphosis. You now find middle class, mainly, and skilled working class. And that is now changing to a knowledge society.

The problem with Africa is that this metamorphosis did not take place. By the time Africa was colonized, Africa was like Europe not at the time of the French Revolution but at the time of the Renaissance. It was a three-class society made up of feudalists, peasants and artisans. What colonialism did was to remove the feudal class and also remove the artisan class because they brought in foreign goods instead using the local artisan products. Therefore you had now a social regression. Not a metamorphosis.

TRC: What strategy have you put in place to achieve this?

YM: We have used several stimuli to do this. The first one is education. Let everybody go to school. For instance, if you look at the literacy rate, when we started it was around 43 percent. It is now 75 percent. Within education we are now adding another element which is skills. If a society is skilled then they can contribute competitively to whatever is going on in the country.

The second stimulus was economic liberalization. If the government is no longer interfering in the transport sector or in the supply of consumer goods, then the people in the society who are capable will come in. They will either come from the peasantry or from the bureaucratic middle class, and they can transform themselves from being just a consumer to being a producer.

But all of this cannot happen if you don’t deal with infrastructure, because if I become a farmer how do I transport my goods from the village to the town? Infrastructure is crucial, so this is another stimulus. The fourth stimulus is the market. We have integrated markets in East and Central Africa. The market of Uganda is not enough to absorb all our products, so the Eastern Corridor, the common market of the East African Community and COMESA have become an important stimulus because if I produce, they buy, and I produce again and they buy, so I expand.

TRC: What opportunities are there to diversify Uganda’s economy away from agriculture?

YM: This will come automatically if you approach it the way we have done. We have natural resources, but we need the factors of production. We used to say that there were four: land, capital, labor and entrepreneurship. These days, a fifth one has been added: knowledge. So, with those, you would be able to convert all these natural resources into products and services which you can sell domestically and outside.

There are also gap fillers like foreign investment and if the local entrepreneurial class does not yet have the capital or does not have yet the knowledge to do something, then foreigners can come in and create wealth, create jobs and expand the tax base of the country. All of those respond to the four stimuli. The four stimuli are the most important. Once you have them, then the others will come in one way or another.

“If you look at the literacy rate, when we started it was around 43 percent. It is now 75 percent.”

TRC: What are you doing to improve the ease of doing business in Uganda?

YM: We are removing bureaucracy and getting rid of civil servants. When a company comes to obtain a license, we cannot allow them to be delayed by bureaucracy. We have created the Uganda Investment Authority as a one-stop center where you can go and get everything you need quickly.

TRC: How do you see the ties between Uganda and the U.S. developing?

YM: People want prosperity. All families in the world need prosperity. And prosperity comes from producing goods or services and having someone buy them. Demand is a crucial stimulus. When we buy what the U.S. produces, we are helping them achieve prosperity. Similarly, when they buy from us, this happens for us. The U.S. is important because they buy from us and we buy from them to support universal prosperity.

We shall sell a lot of things to them. Obviously there is our oil and gas and our minerals, but the most durable exports are actually agricultural and tourism and human resources. The minerals are there but they are not as important in the long term as these other areas.

TRC: What have been the main factors behind Uganda’s relative stability as compared to others in the region?

YM: We have stability while many of our neighbors don’t have it. This is an area where we stand out as a country in the region. That security comes from my vision, which is that we look at ourselves as social doctors, and this social doctor should be able to diagnose a society and say what it is suffering from. The problem is that if the diagnosis is wrong, then the patient will never be cured. When we talk of insecurity in Africa it is partly because the diagnosis was wrong. For example, if you believe in tribalism, you can’t build an army. How would you have an army of one tribe? If you believe in religious sectarianism, how would you build stable national institutions?

My interest is in prosperity for my people. This insecurity in the region is really due to that misanalysis of what the society needs.