Being a landlocked country limited by industrial and infrastructural challenges, Uganda knows it must find creative, comprehensive economic solutions. Its trade strategy is thus based on regional trade initiatives and a better regulatory framework, one that envisions public-private partnerships and support for local producers. Uganda’s improved ties with the United States will also benefit international exports.

More challenging for Uganda, however, has been the instability of its top trading partner, South Sudan, which in 2013 accounted for $360 million of Ugandan exports. Uganda in 2014 increased trade with the Democratic Republic of the Congo, and this growing African economy should remain a permanent complement to the expected renewed trade with a more stable future South Sudan. 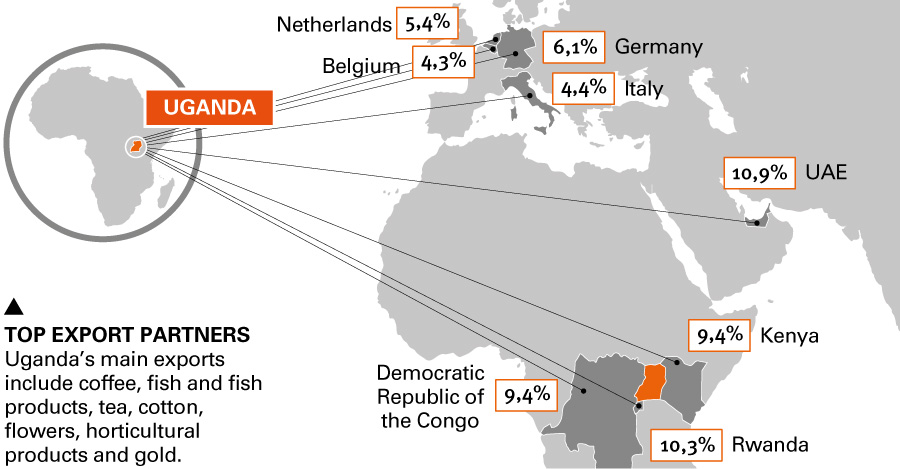 “The UDC demonstrates that the government of Uganda intends to catalyze industrial development in this country.”

Leaders seek to add value to Uganda’s export products. For example, Uganda offers high-quality leather, but it is generally sold abroad for processing — costing Uganda both profit and prestige. According to the Aga Khan Foundation, leather exports’ profits could be doubled, simply through domestic processing.

“You have to have a good brand,” says Elly Twineyo Kamugisha, Executive director of Uganda Export Promotion Board. “This is all about perception.” Kamugisha believes Uganda must identify its most viable exports, increase non-traditional exports, and reduce the percentage of primary products exported.

Ugandan exporters may benefit more from other trade deals, like the African Growth and Opportunity Act (AGOA). Although signed with much fanfare in 2000 by then-President Bill Clinton, the deal had few results. However, leaders have new hopes for AGOA. “Our challenge has been access,” says Trade Minister Kyabadde. “We are already working closely with the American Chamber of Commerce to access our consumers in America,” she adds.

Main photo: Uganda is a member of the COMESA trade bloc, of the EAC, and a signatory to the Africa Free Trade Zone. Source: CIA World Factbook.

The Uganda Development Corporation (UDC), a private venture that bridges public policy and private-sector execution, has been KIS’ steady partner. “UDC provides the compromise and the solution that the private sector needs,” Opiro attests.