Interview with Asier Atutxa, chairman of the Port Authority of Bilbao 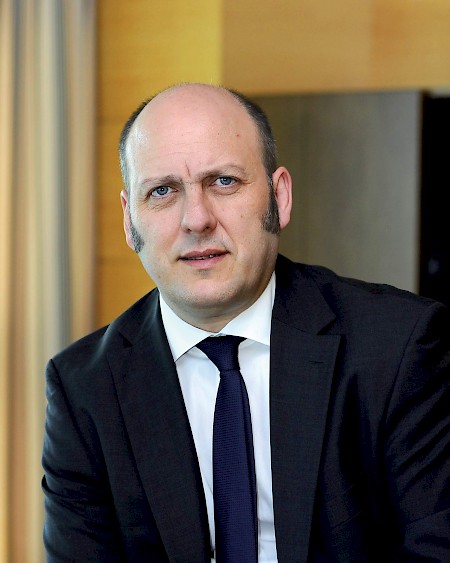 The port of Bilbao is one of Europe’s busiest logistics centres, serving the Atlantic route for container traffic. Asier Atutxa, the port’s chairman, spoke to The Report Company about its history, its current operations, its place in the Basque economy, and its plans for the future, both with a view to Europe and further afield.

The Report Company: What is the port’s history and what are its characteristics today?

Asier Atutxa: The port is 700 years old. Its history has always been closely linked to Basque economics. In fact, the town of Bilbao grew up around the port. Over the years, and with the growth of the port on a global scale, the river wasn't deep enough to handle the ships. Ships got bigger and the cargo they carried got heavier so the port had to change strategy, abandoning the river to build a port for the twentieth century in the Abra bay.

Seven hundred years later however, the port has once again become a major player in Bilbao's regeneration. Without it, we wouldn't have the Bilbao we know today. Where the Guggenheim is now located used to be the port, and many of the areas next to the river were part of it too. Bilbao was born 700 years ago around the port, and 700 years later Bilbao has been regenerated, with the help of other factors too, by the opportunities provided by the Abra Bay Port.

In 1992, we decided to start construction, and went from being a river port to one strategically positioned in the twenty-first century.

Today the Port of Bilbao is a thermometer for Basque economic activity. We are one of the least indebted ports in the country, and with the income we generate, around €30 million a year, we have the capacity and independence to invest the necessary funds without crippling ourselves economically.

TRC: What services does the port offer?

AA: The Port of Bilbao has three main areas of activity: The zone closest to Zierbena municipality, which is the most industrial; an intermediate mixed zone where there is industrial activity alongside commercial; and a third zone that is the most traditionally commercial, and that historically has generated the most income in the port. We are connected to 900 ports worldwide and we move 30 million tonnes of cargo a year. Last year we saw an increase in traffic of close to 2.5 percent. This means that we are managing to turn the slow down in traffic around in a slow and steady way.

“Our traffic with the UK has been high historically. Nine percent of traffic from the Port of Bilbao goes there.”

TRC: To what do you attribute the port’s recovery?

TRC: Where do you see growth opportunities?

AA: We want to grow in liquid and solid goods, energy, agricultural, and steel goods, and containers.

One of the big growth opportunities is from the European Atlantic seaboard. There is already a lot of traffic that uses this route towards northern and southern Europe, and part of this traffic could transfer from this route to the sea.

Another opportunity is in America. Over time, some lines have been lost and we want to get these running again. We're fighting for projects in Asia and Africa, and looking closer to home as well. We have the chance to increase the Port of Bilbao's influence in Spain itself, thanks to dry docks, systems linking railways to ports and motorway transport.

TRC: Do you see the possibility for linkages with other ports in the region?

AA: We try and create synergy with other Basque ports. We compete much more directly with other ports. We have to keep in mind that we are the biggest port on Spain's northern coast. We have to compete with other Spanish ports, but I also believe that the biggest growth area is in traffic that doesn't yet use the sea.

“The key in any area of management, in my opinion, is to work hard, surround yourself with a good team of people, and coordinate your actions in the best way possible.”

TRC: What is the port’s contribution to the Basque Country?

AA: Eighty percent of Basque Country logistics passes through the Port of Bilbao, so we are a fundamental cog in our economy. We are a port that is very connected with what is going on in the Basque Country. There are ports that can be doing well and the region they belong to isn't doing well, and vice versa. That's because they have no link to to the economic activity of their surrounding areas. Our level of activity is directly related to the import and export rate of the area we serve.

TRC: What are the main points of the strategic plan that lays out the port’s future?

AA: The goal is increase traffic, to which end we've increased our commercial activity. But we also don't want to lose sight of the infrastructure the port needs to keep growing and attract new traffic in the future. The main building work in the port ended a few years ago, but we still need to build the central breakwater. In Biscay we don't have a lot of industrial land and many businesses need land close to the port, or in the port itself, for logistical reasons and to keep producing from the Basque Country. The more business goes through the port, the better off the Basque Country will be. The two biggest challenges we face are to increase traffic by reinforcing the commercial structure, looking for synergy with other ports, and alongside this, maintaining infrastructure. We also have to open up the port to those around us. This is fundamental as it will allow us to grow into an even more flexible and competitive port.

TRC: What relationship do you have with the UK?

AA: Our traffic with the UK has been high historically. Nine percent of traffic from the Port of Bilbao goes there. A large percentage of the 610,000 containers that pass through the port each year come from and go to the UK. It is one of the countries we have the most regular links with. We have a minimum of one daily departure to the British Isles, which makes us the main Spanish port for arrival and departure of goods coming from or going to the UK. So there is a real potential for growth with all the countries of Atlantic Europe, the UK included.

“We have to be close to the client and provide a bespoke service that is flexible, while at the same time developing our infrastructure and maintaining what we already have in the best way, so the port can keep being an important part of the Basque economy's motor.”

TRC: You have worked, among other places, at the Guggenheim. What did you bring to this job from your previous position?

AA: Management, never stopping, coordinated work, using common sense. And interpersonal management. The key in any area of management, in my opinion, is to work hard, surround yourself with a good team of people, and coordinate your actions in the best way possible. I think that I try to bring a different vision, no better or worse, for a simple reason; in the past I had no connection to the world of ports. Sometimes, and I'm not saying it’s so in my case, it's good for organisations to incorporate a different vision, and for that you need to bring people with no relation to your past on board.

TRC: Are you optimistic about the future?

AA: Yes, definitely. Sometimes I find myself with people who say to me: "Isn't it too optimistic to say you're going to reach 37.5 million tonnes in 5 years" What's most important to me aren't the exact growth figures. What's important is that business in the port grows a great deal. It's the attitude that's important. We have to be close to the client and provide a bespoke service that is flexible, while at the same time developing our infrastructure and maintaining what we already have in the best way, so the port can keep being an important part of the Basque economy's motor. Clients must feel they're at the centre of our business and that we're able to provide them with flexible solutions.