Marques de Riscal is more than just a winery producing world-beating wines. With its Frank Gehry-designed City of Wine complex, including a hotel and spa, surrounded by vineyards and wine cellars dating from 1858, it is a tourism destination and a cultural experience. Alejandro Aznar, chairman of the winery, spoke to The Report Company about the Basque tradition of winemaking.

The Report Company: How does the Basque Country compare to others in terms of winemaking?

Alejandro Aznar: We're in Rioja Alavesa, which is a region with perhaps the longest viticulture tradition in Spain. It is also a large producer of Designation of Origin wines, about 40 percent of Spanish red wine. No other denomination reaches 10 percent.

Within Rioja we are the oldest producer, and the one that transformed wines from Rioja into a modern concept: aged, French style wine in the nineteenth century. Before that in this area, wines weren't aged. The Marquis of Riscal, who was exiled in Bordeaux, learned the techniques of ageing wine that he brought back to his vineyards in Rioja.

TRC: What new techniques does your company use?

AA: Viticulture has existed since before Roman times. What's new is trying to make wine known to the wider public. Before this it was kept within the world of wine producers. What we've tried to do with this project is bring the public closer so they can discover wine. We didn't invent this concept ourselves. We learned it from the new world, which has used this technique from the beginning in South Africa, Australia, and Chile and the USA. We were lagging behind, with a more inward looking wine culture.

TRC: What type of tourism does wine bring to the Basque Country?

This area has many of the requirements needed to become a tourist area, both for culture and food. This type of tourism attracts a more affluent crowd than bucket and spade tourism. It is much more attractive, economically speaking; above all during the years of crisis when then internal market suffered greatly. We were able to survive well thanks to foreign buyers who came to Rioja with a specific idea of tourism.

TRC: How did the idea come about to build the City of Wine hotel?

AA: When we saw what was going on in the New World and how they presented viticulture to the public, we knew we needed to move from the 19th to the 21st century. We needed to change our mentality and concept completely, and start from zero. And of course, we're from Bilbao so we saw what was going on with the Guggenheim coming here. The museum put Bilbao on the map. Why not try to bring Riscal to the whole world through architecture too? It was an idea that didn't come about overnight; it took time. It wasn't hard as we could use Bilbao as a reference point.

“Viticulture has existed since before Roman times. What's new is trying to make wine known to the wider public.”

TRC: How have you incorporated the trend towards wine tourism into the hotel?

AA: We had a clear idea of what kind of hotel we wanted from the start. What we tried to do was forge partnerships with the best professionals. For example, Gehry in architecture, Starwood for the hotel, and we wanted the restaurant to be top quality, as that adds value to the wine and brings the whole thing up a level. We worked with someone we've known forever, Francis Paniego from Echaurren Restaurant, who was the first Michelin-starred chef in the Rioja region. Now there are two. And we definitely wanted a Michelin-starred chef in the Marques de Riscal restaurant and hotel. It took five years to get the star, but it's really important to get it and then keep it. Because I think that with that ranking the whole product goes up a notch.

TRC: How successful has the hotel been so far?

AA: There are two aspects; one is the marketing campaign that the hotel undertook for Marques de Riscal, creating its place in the world. This has worked better than imagined. The other question is how to promote the hotel. We're happy with how this is going as the crisis hit Spain hard, and there have been bad years. However, after eight years being open, the hotel is doing well.

TRC: Where do guests tend to come from?

AA: All over. Logically, the number of Spanish guests has fallen due to the crisis. What's good is that we have a lot of international guests.

TRC: What is it that marks this place out from the others?

AA: We have vinotherapy, carried out by a partner company, Caudalie, who came up with the concept. When we started this we were worried about whether there was a golf course nearby. In the end though, nobody was interested in golf. People that come here are here for the culture and the food. The Rioja region is full of culture. There are some amazing churches and monasteries, great food, gorgeous villages, St James' Way passes through here, and there are hills with outstanding walking.

TRC: How is the Spanish wine market doing at the moment?

AA: Spain is the largest global vineyard in terms of area. France leads the way in production, so we still need to educate peoples' palates. We need to bring wine to the people. However, wine consumption in Spain is falling. All wine producers need to insist, along with the ministry of culture, that a wine-producing country as important as Spain continues to maintain reasonable quotas of national consumption. Of course exports need to be maintained too, but national consumption has fallen a lot, and so knowing more about wine has to be the path to bring people back to drinking it.

“This area has many of the requirements needed to become a tourist area, both for culture and food. This type of tourism attracts a more affluent crowd than bucket and spade tourism.”

TRC: What is your current production volume?

AA: At Marques de Riscal it's around one million cases, with 50 percent coming from Rioja and 50 percent from Rueda wineries.

TRC: What are you doing with regard to internationalisation?

AA: France and Italy have done much more than Spanish wines, even though Riscal has been exporting for 150 years. Now however, with the crisis and fall in the domestic market, all Spanish wine producers are focusing on exports. From my point of view though, they're focusing on prices, which is very dangerous. I think that Spain has an important ace to play, the price-quality relationship. That's what the market needs to know, and when it does, it will appreciate it. Selling abroad based solely on price is a bad policy as the wine will end up costing less. But of course, when there are people selling the wine abroad so aggressively, the price falls.

TRC: What is your relationship like with the UK?

AA: It's the biggest market for Rioja wine, not for the company as a whole though. First is the US, followed by Germany, Switzerland, and then the UK comes in fourth place.

But the UK is a good example of aggressive prices. There's a lot of competition, people buy wine cheaply and there are wines from all over the world, which means tight price margins.

TRC: What are your main challenges for the future?

AA: I think it's important that Riscal was one of the innovators. Since then however, there have been many wine related projects. All told with the region and wine producers, we have one million visitors.

There are many important projects like the Museum of Wine, which is a wonder. If more projects like this come about and we all work together it will be good news for the region and for business. This is what they do well in France and Italy, and we Spanish have to do the same.

For example, we are members of various associations, we are in partnership with the Guggenheim to attract tourists, and we are part of the City of Wine.

“When we saw what was going on in the New World and how they presented viticulture to the public, we knew we needed to move from the 19th to the 21st century. We needed to change our mentality and concept completely, and start from zero.”

TRC: Do you identify with other characteristics associated with the Basque Country?

AA: The growing area in Rioja Alavesa is 500 hectares, out of 60,000 in the whole of the Rioja region. That's the land to the north of the river. Where we are is the Basque Country but we are still in the same region, Rioja. The region works together and is made up of three sub-zones: Rioja around Alava, lower Rioja, and upper Rioja. All together these areas produce Denomination of Origin Rioja wine. We are located in the first sub-area, so we are a Basque company.

We have a lot in common with Basque people with regard to reliability, long term plans, and family projects. All these qualities are very Basque.

TRC: How do you apply innovation at Marques de Riscal?

AA: Wine growing techniques are really up to date, but all that technology is now within everybody's grasp. Riscal needs to keep up. Maybe our most innovative idea at Riscal in recent years has been wine tourism.

TRC: How do you combine your chairmanship of the shipping line Ibaizabal you’re your role at Marques de Riscal?

AA: The typical things are innovation and tradition. But it's one thing to say something, another to act on it. Basque people are not about talking, they are more about doing and I think that here, they have got things done. 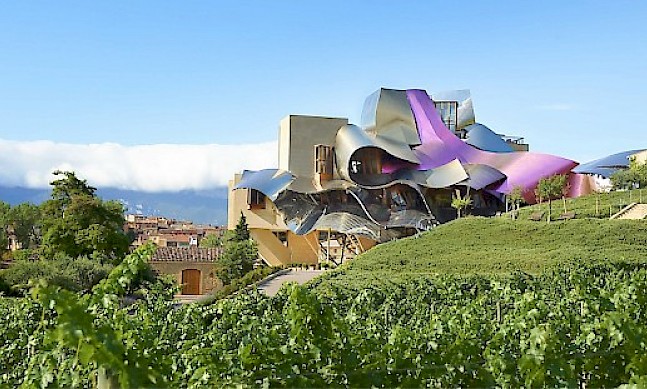 The Basque Country’s segment of the Rioja wine region is taking viticulture to a new level.